As we arrived at the site this morning, we were greeted with something that was new this trip – total silence! We arrived just after lunch time, but there were no little ones running up to greet us. Veronica shared they had already eaten and gone home – now, how was that possible? Well, we learned that they normally are off as soon as they are done with lunch, which happens after their preschool day is finished, but when we are on the property, the children are more likely to stay around. Who can’t relate to wanting to be part of the out-of-the-ordinary action?

Next it was off to share the new books we purchased yesterday on our textbook expedition. We found a resource of culturally and age appropriate reading books that are uncommonly inexpensive. We bought a number of them to add to the library. The teachers were thrilled and dove right in to review them. 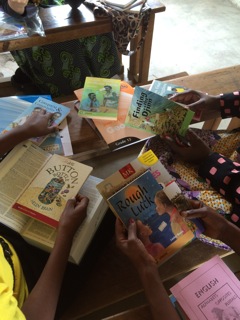 Lots of new books for the team and girls to read 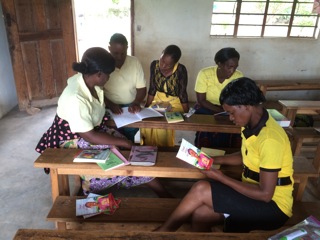 It’s clear these are going to be an asset! 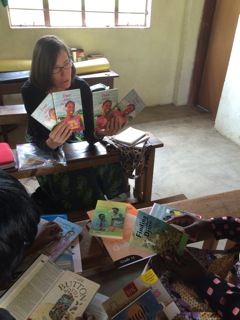 As a way of supporting the Grade 11 girls in their literacy, we bought multiple copies of the same book so that Theresa can have a reading group with them.

As this was happening, Mary, Susan and Esther (three of our Grade 8 girls) arrived, and we used this as an opportunity to show them the new phonics tool. Theresa demonstrated how it can read the letter of a word, pronounce the sound of the letter, read the word the letter is in, or read the whole book! Lots of opportunity for the girls to improve their English.

Susan tries out the “magic” pen. 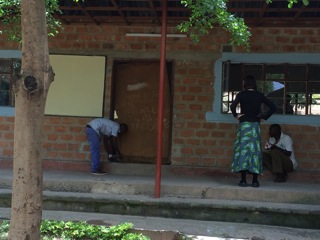 Floriano and Jen review some measurements.

Once that was finalized, the team began to work on the next part of the girls program: the agreements. We broke into 3 groups, and each group worked on one of these areas: Staff, Parents, Girls. The task was to brainstorm what each group will need to agree to in order to best support the success of the program. 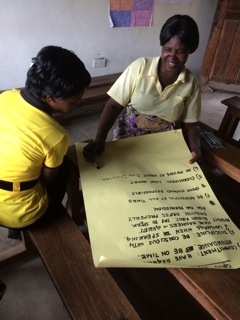 Joy and Beatrice begin writing ideas for the Girls Agreement. 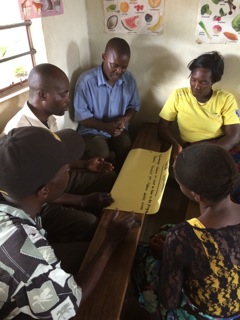 The mighty team of Josephine, Susan, Charles, Elias and Peter decide to tackle the Parents agreement. 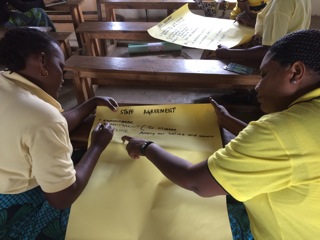 Veronica and Theresa discuss how critical discipline and commitment are for the Staff Agreement.

Once each group was done, we rotated the papers so the other groups had a chance to contribute to what the previous group started. Once everyone had added to every paper, each group shared what they had come up with and the team had a chance to ask questions. 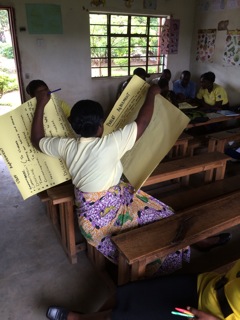 And now the papers switch! Each team was also able to add to the previous team’s thinking.

First up were the agreements for the Parents, presented by Charles and Josephine. It is critical for the parents to support their daughters to achieve success. Some ideas for the agreement were to make sure the girls stay in school (very important!), to encourage the girls to study by giving them more time and support, and to keep tabs on their academic progress. 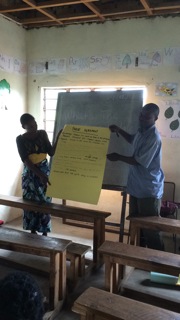 Charles presents the ideas that are important for the parents to agree to.

This brought up an interesting question – some of the parents don’t know how to speak English or read. Would it be possible for them to review academic progress? The team explained that if the parent wasn’t able to, they would ask a friend or family member to help. There is strong community support here in Kantolomba! 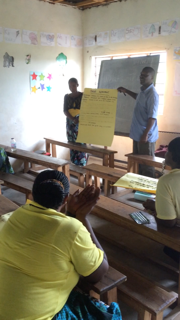 Charles answers some questions that have arisen about the Parents Agreement.

Then it was on to the Staff agreements, presented by Veronica. The staff agreement was arranged by values, with statements that represented how those values should be implemented. Some of the values are: delegate – we have to help each other out; consistency – our duty is to make sure each child is treated equally; time – be punctual; communication – we need to communicate with each other to avoid breakdowns. 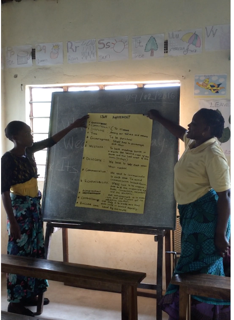 Veronica, with Josephine’s assistance, shares her thoughts about what they, as a Staff, should be conscious of doing.

The last agreement was for the girls. It covered many areas: attendance (commitment), discipline, respect, responsibility, encouragement, boys, safety and others. As a group, we discussed whether these are reasonable and measurable. 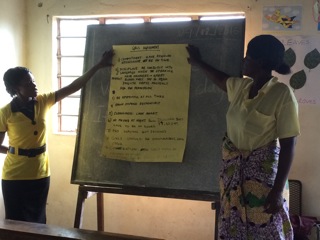 Beatrice and Joy start the conversation about the agreements for the girls.

For example, attendance we could measure easily—they were either in class or not. However, other areas might be more nuanced, such as respect and encouragement. As we were about to discuss this further, rain started thundering down! A nice moment for life to let us know to take a break. 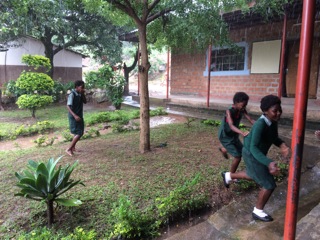 The girls run for cover.

Rain always provides a nice time to sit quietly and just enjoy what is there. 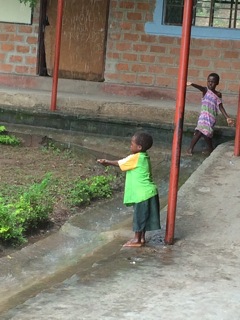 This little guy uses the rain as an opportunity to quench his thirst. 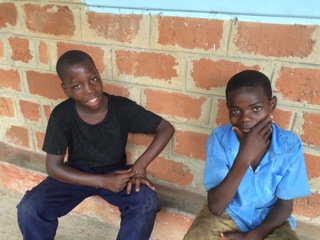 Two boys beckoned us to take their picture. They were a little shy but ready with their smiles.

After the rain, we reassembled to continue the conversation and discuss that what is just as important as the agreements is talking to the girls about why there are agreements to begin with. The teachers said they wanted the girls to understand the impact of their decisions and consider what choices would lead them to a better life.

As the conversation evolved, we divided the list into measurable items (attendance, dressing properly, passing exams), and “guidelines” that we want to encourage the girls to follow. This will allow them to have a dialogue with the girls, which could be helpful, and allow one-on-one counseling and more engaged conversation. After a productive conversation, it was time to eat! 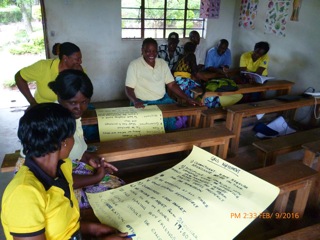 Veronica gets a laugh out of something one of the team members said. Working together on the agreements was a lot of fun.

We used the time to continue to work with Silvia and Mirriam on being our “reporters.” Today’s task was on how to operate a camera. The girls learned the basic operations: on/off, taking a picture, viewing photos, lighting. We discussed taking photos facing the sun/away from the sun and zooming in/zooming out.

Camera lessons! We discussed how to focus on items when they are close to the camera.

It was fun to see them take to it so quickly; within seconds they learn all of the functions. We project that this illustrates how the girls are quite ready and able to do new things if given the opportunity, which the girls program hopes to do.

After that lesson and lunch, it was time to head back to Castle Lodge. Another full day!