Each Saturday, the girls in the program gather for a workshop, and today we had something very special planned. We were going to show them a movie, “Queen of Katwe,” about a young girl from a poor area in Uganda who, through determination and commitment, becomes a chess champion in her country.

However, we had one big hiccup in the morning – no electricity in Kantolomba! Through a good deal of wheeling and dealing, we secured an LCD projector and screen and had them sent to us at the lodge. We decided if the LCD projector actually worked (technology being iffy in the best of circumstances), perhaps we would have the girls join us here. 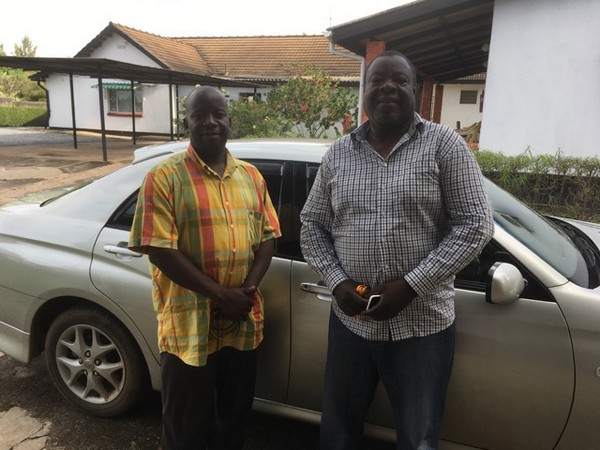 Some friends of Theresa arrive with the projector and screen. 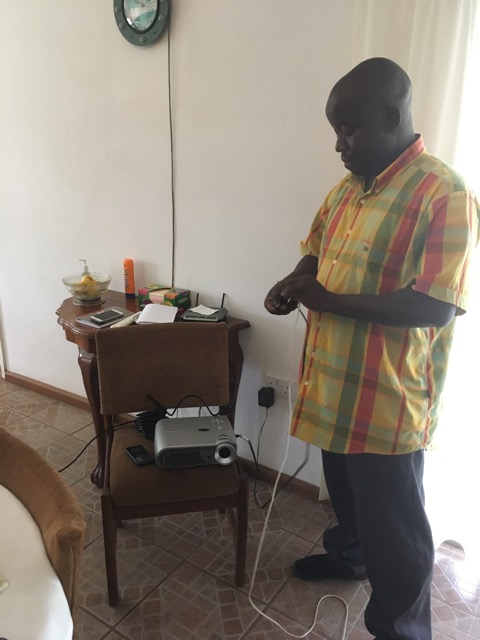 Some electrical wiring was needed to power up the projector…

And up the projector screen went!

The projector worked (yay!), so we put in a call to Theresa and they hired a mini-bus to bring the girls down to the lodge. Flexibility, a quality in abundance in Zambia, allowed us to move 37 girls from one side of town to the other at a moment’s notice! 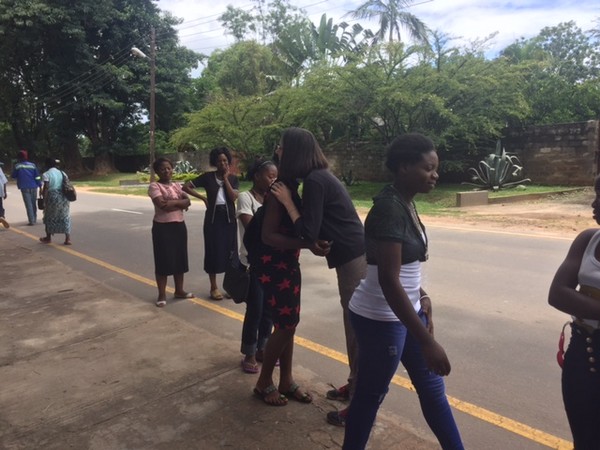 Greeting the girls on arrival. 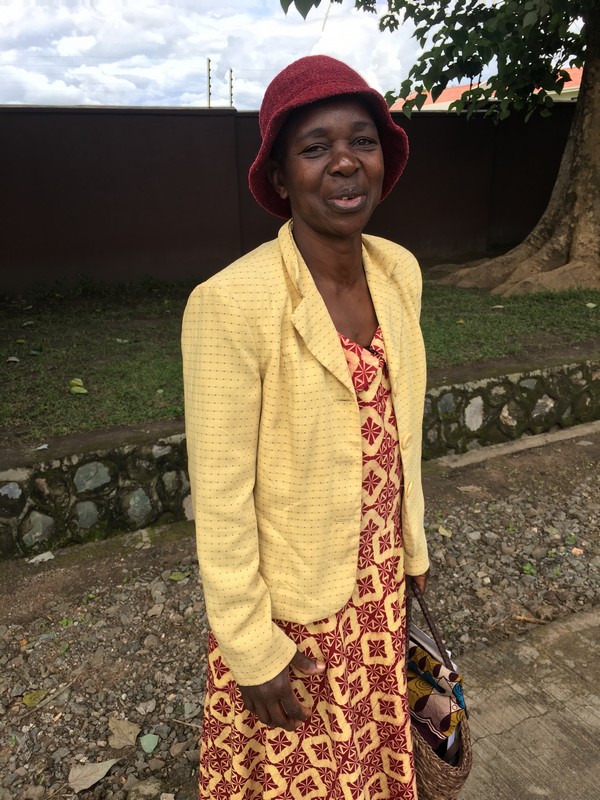 A woman close by was astounded to see these musungus meeting this group of Zambian girls as old friends! 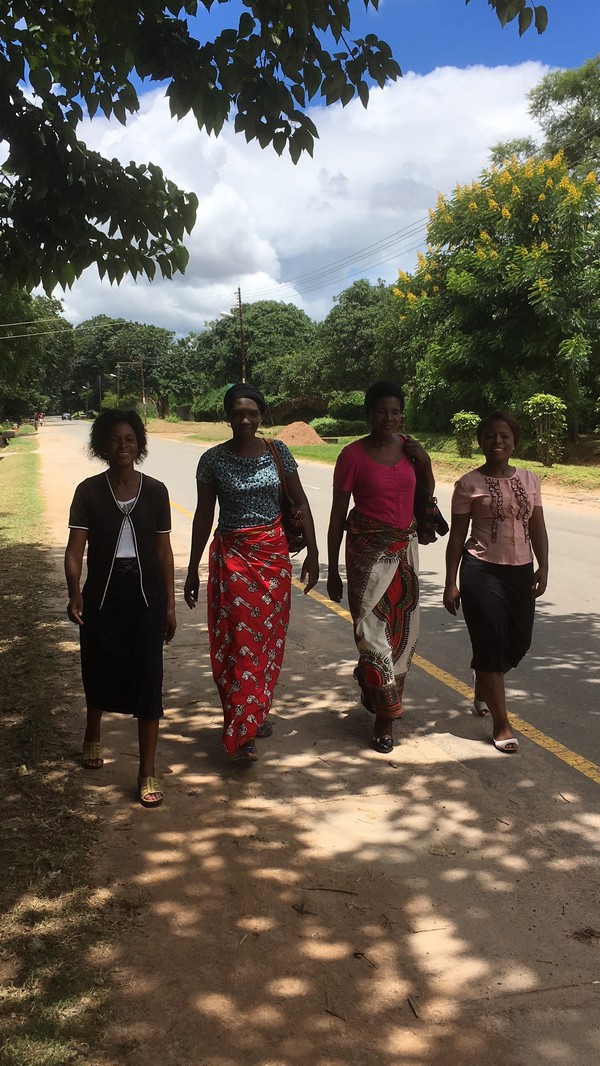 Our teachers joined us too! 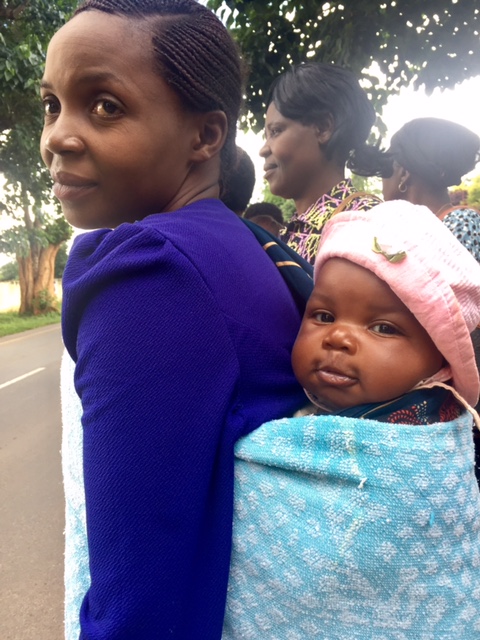 Though this day was for the girls, we decided to give special dispensation for Baby Peace. 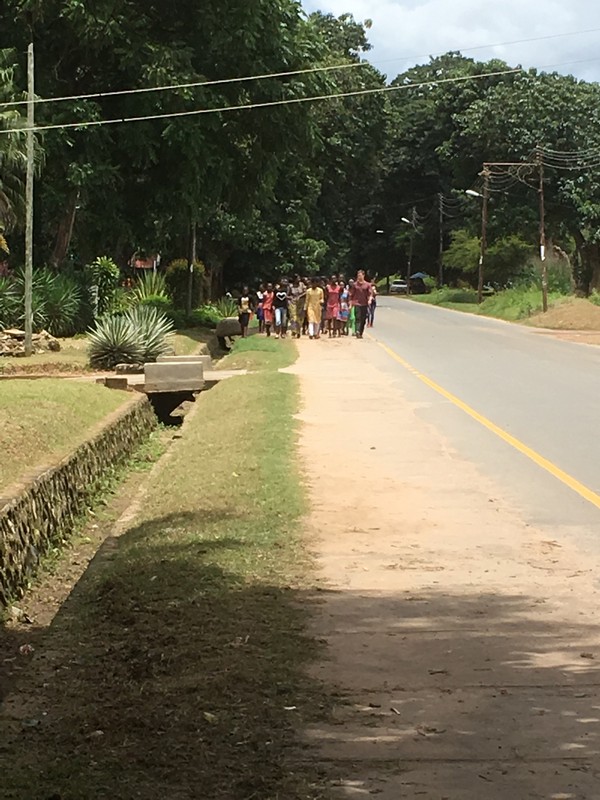 It was fun to see the large group from a distance. 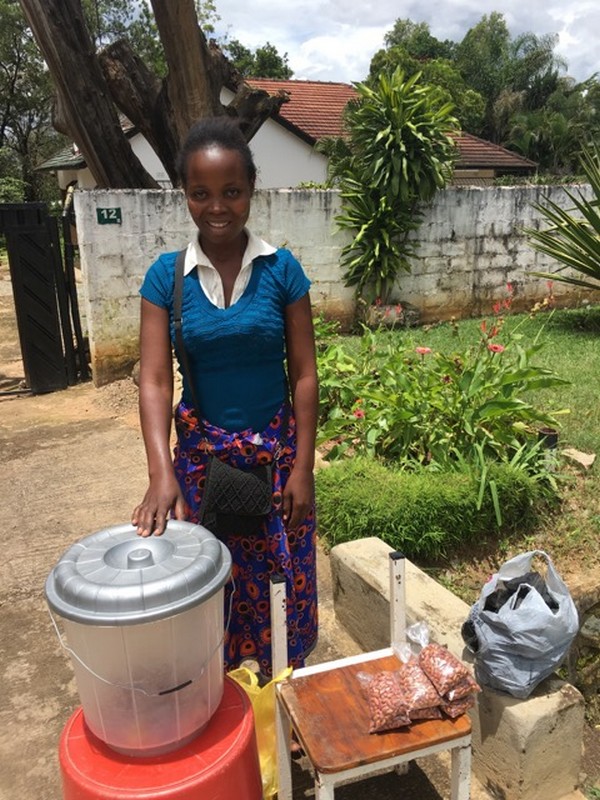 You can’t watch a movie without peanuts! We bought some for the girls to snack on during the film. Talk about shopping locally! This neighborhood vendor (who roasted and packed the peanuts in her home) was thrilled at the unusually large order. 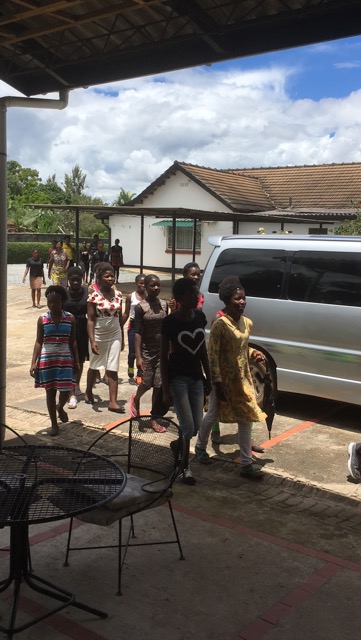 Arriving at the lodge. 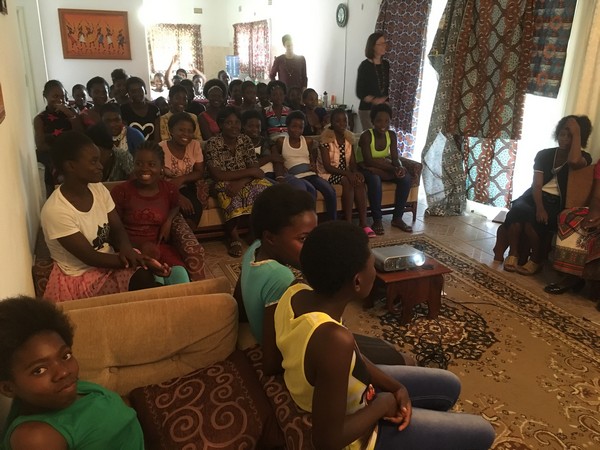 We definitely packed them in! Over 40 girls and teachers.

During the film we paused at different points, especially when there was a scene that demonstrated something we wanted to make sure the girls were able to track. One of these scenes is where the main character, Phiona, joins the community chess club and gets laughed at, but instead of running away she shows the “fighter” in her and stays. When we discussed this, Veronica shared her experience, similar to Phiona’s. For those of you who may not know, Veronica went back to school later in life to finish her education, and currently is going to school to become an accountant. In her late 30’s, she went back to finish her education, starting with grade 9, others laughed at her and asked her why she was even bothering. But she stuck it through, and when she passed her Grade 12s they were all very happy for her. When she pursued her degree in accounting, many were inspired by her to continue their own education. 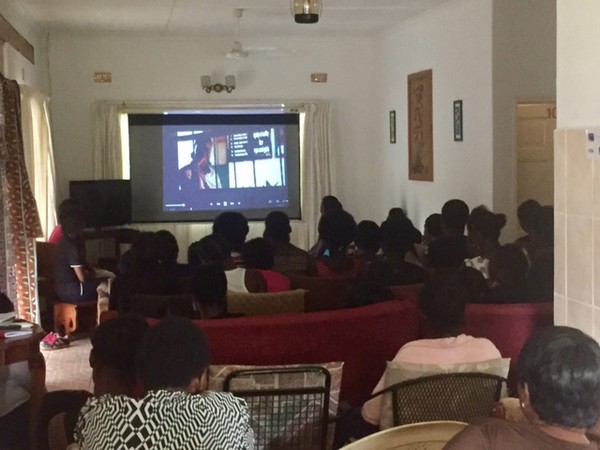 The girls watching the film. 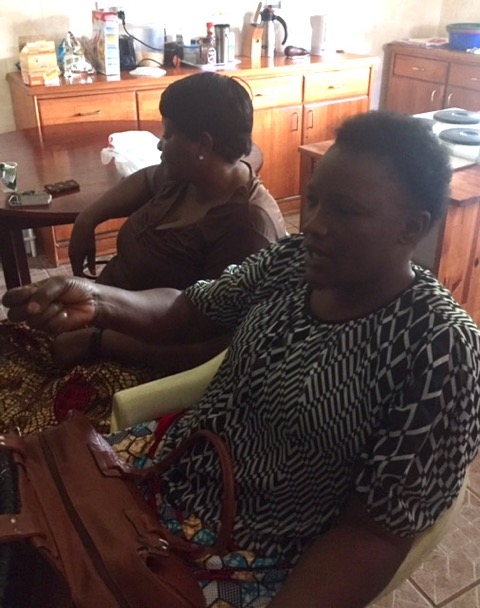 It was so much fun to watch their reactions to the film – cheering for Phiona when she did well, laughing at the other characters’ humorous antics, and hopefully walking away relating to her and her environment, struggles and perseverance. We knew we would have much to talk about the next day when we drilled down a bit more into the film, but for now, it was time for the girls to head back to Kantolomba. 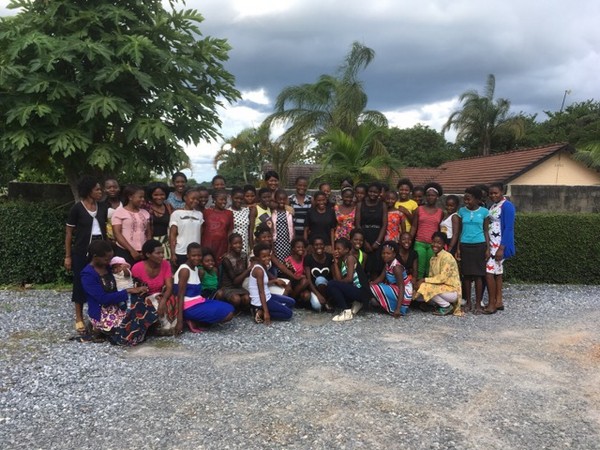 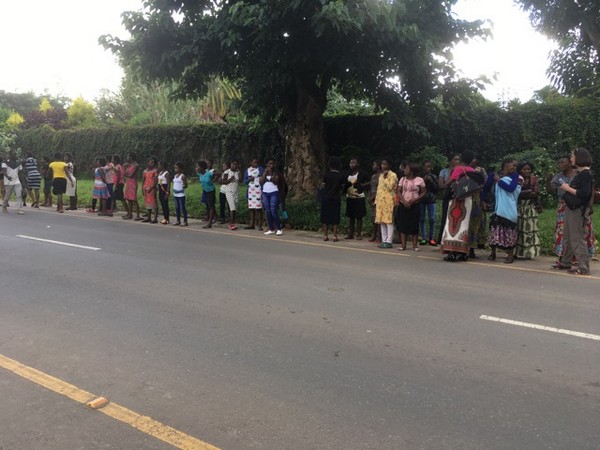 Waiting for the mini-bus to arrive. 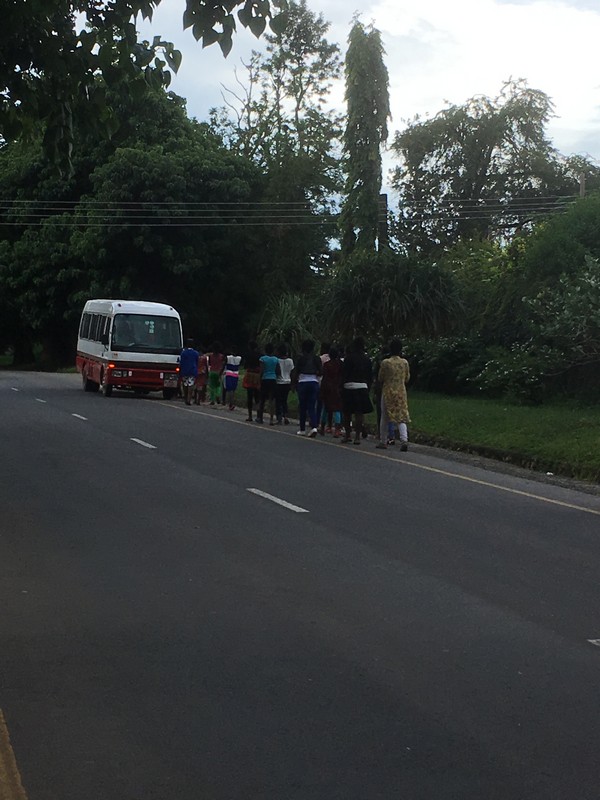 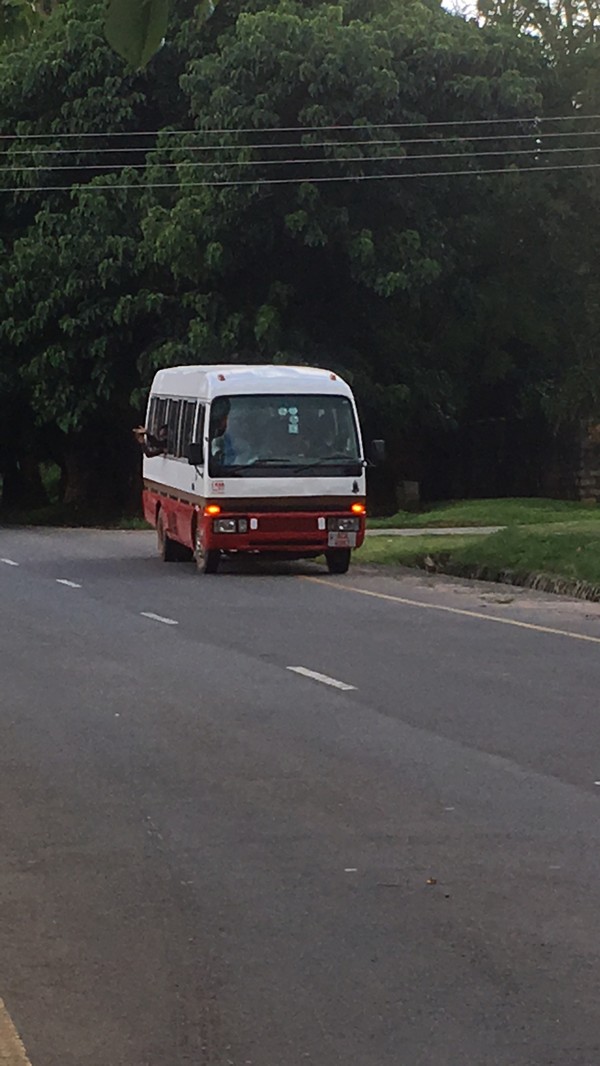 Arms waving goodbye as they head back to Kantolomba. A fun day for all!